By Denney Jewelers On August 8, 2012 · Leave a Comment · In Most Romantic Couple Finalists, Proposals

Travis (my fiance) told my son Zander that he had a special story to read to him, so he went upstairs to get the book.  Travis, Zander, and I sat around the coffed table as Travis began reading the story to us.

The story was title, “The Princess and Her Special Baby Lion”  and he started to read:

“The Princess went for a walk one day and found a special baby lion.  From the first time she laid her eyes on the lion she knew the lion belonged with her, so she brought the special baby lion home with her.
One day the baby lion wandered outside of the castle walls and got lost.

Once the Princess realized the baby lion was gone she knew there was only one person who could help her get her baby back.  She went to find the Knight who could save her lion. She got to the Knight and explained what had happened and begged the Knight to help her find her special baby lion. 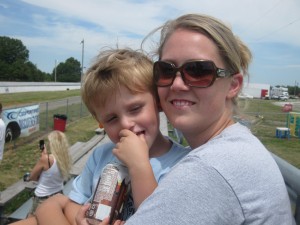 After some thought, the Knight agreed to help her.  He went all over the Kingdom looking for the baby lion.  He made it into the Troll Village where he knew the baby lion was being held captive.  He had to fight the Troll King and did so successfully. After he saved the baby lion he brought him back to the castle where he belonged with his Princess.

The Princess thanked the Knight and told him that Her Kingdom would forever be in his debt.  The Knight began to ride away and as he rode away he felt a big hole in his heart.  He realized that something was missing.  He realized that the Princess was the most beautiful and loving thing that he had ever seen and that the baby lion and him had a very special connection.  He immediately turned around and rode back to the castle and said to the Princess…”

At this point Travis turned the page and there was a square hole cut in the book and our engagement ring was inside the hole and the page said, “I LOVE YOU WITH ALL OF MY HEART, WILL YOU SPEND THE REST OF YOUR LIFE WITH ME?”

Zander was so excited pointing at the ring saying, “LOOK MOMMY, LOOK!”   Travis and I were both tearing up and of course I said yes.  The best part is that Travis wrote the story himself and designed it to closely resemble our lives. Travis came into our life when Zander was 6 months old, and as he said in the story he filled  a part of our lives that was missing until we had him.  We are all perfect matches for each other in every way.